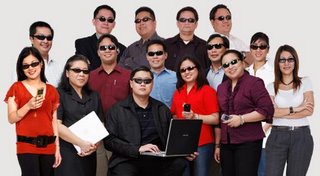 The Internet and Mobile Marketing Association of the Philippines (IMMAP) launch event last Wednesday, November 29, was a success!

It was great to hear that the AdBoard of the Philippines, as indicated by its President - Matec Villanueva, is seriously considering the inclusion of IMMAP as they recognize that the Internet and mobile are new forms of media where advertising is now being done.

We were also told that the next Ad Congress registration shall be done purely online. Although for most geeks, that may not be a big deal, for Ad Board folks, it is.

The founding board of the group are:

I'll post info about the new members who were inducted during the launch next time. But let mention great thanks to Wallace Panlilio of TinCanMobile and Dodjie Lopez of Directories Philippines Corporation for joining.

I invited Jherlie Cheng of Posh Marketing Services and Abby Lim of Virramall.com as my personal guest during the event. It is great to see Aileen Apolo, Philippine Country Consultant of Google, who also took time to attend and blog about the event.

Posted by Janette Toral at 7:13 AM