4As (http://www.4asphilippines.com/) recently asked the Internet and Mobile Marketing Association of the Philippines (IMMAP) to look into the proposed "4As Pitch Policy Implementing Rules and Regulations".

The proposed policy is in line with 4As thrust of promoting professional trade practices and conduct of all stakeholders in the marketing communications industry. It covers instances where a client requires 2 or more agencies to present their speculative creative work. It provides guidelines for both agency and client on how to organize, conduct and conclude a pitch process.

Last July 20, the board met and agreed to issue this IMMAP official statement on 4As Pitch Policy Implementing Rules and Regulations.


IMMAP believes that the essence of the Pitch Fee principle will put some discipline in the way marketing pitches are handled both by clients and agencies.

IMMAP subscribe to the idea of pitch fee policy even for digital once the engagement with the agency would require man hours for creative, strategic and production work required to mount the proposal. We feel that subscribing to a process is a good first step in maturing the practice.
As IMMAP, we support to giving its members, regardless of size, an equal opportunity to work with industry giants. As an organization, we submit to any processes in place that protects both clients and participating agencies.

However, the IMMAP board deliberated the following critical considerations to maintain equal treatment to its membership base:

1) Compensation: Appropriate confirmation for the man hours incurred in creating a pitch.

2) Ownership: To protect the intellectual property generated within the pitch, so that a client can own those ideas after the pitch's conclusion.

3) Exclusions: We have agreed that the Fees only apply to pitches that require the submission of creative materials, concepts, or mockups. Neither credentials nor technology pitches shall be covered by pitch fees.

4) Unintended Consequences: IMMAP has a very different eco-system wherein the membership has diverse backgrounds. We are very cautious on the unintended consequences of imposing pitch fees in our industry, particularly at a time when the client-agency-supplier structure is not quite defined, and clients are not yet sure where they will place digital marketing functions.

Therefore, the IMMAP Board has arrived at a resolution which states the following:

"IMMAP is supporting the 4As Pitch Fee policy for creative pitches. Aside from Credential Presentations, Technology pitches (like the PR exclusion in the existing guidelines) shall be deemed excluded. The pitch fee is only applicable to IMMAP members which are 4As members. To support this principle, IMMAP will create an online facility to report abuses of the policy within its membership ecosystem. All consolidated grievances and complaints shall be endorsed to 4As to take action for the appropriate sanctions and/or penalties as defined under its guidelines."

It is interesting to note how branded medicines are becoming creative and high-tech even in their efforts to create awareness. Some of them have used online contest, social networks, and the likes. In their advertisements, we see some of them using celebrities.

Alaxan FR tapped Manny Pacquiao. During major fights, we see the Alaxan brand active in promoting its product. It even had an online contest lately recognizing people who do hard labor.

Biogesic has John Lloyd. The brand is also active especially when the actor has a major movie flick in cinemas. Running an online search shows one result citing a product warning.

Cortal SQR tapped Philippine Azkals. Although this part, I find its campaign not tightly integrated, as doing a search about "Cortal" will immediately show you 3 forum results on the 1st page discussing the brand as an abortion pill. On another extreme, you also see boxing champ Pacquiao on TV giving encouraging words to the Azkals after losing their recent game, then the Alaxan ad is shown.

Advil has Jerico Rosales promoting its brand. In my observation, the brand is not active in comparison to the above 3. Although recently, the brand has engaged in a flash mob type of activity with the intent of educating the masses about its product benefits.

Watching the video taken at Market! Market!, Advil focused its message in highlighting how the new types of pain-related ailments today (such as body ache, tooth ache, dysmenorrhea, and headache) are much stronger and can no longer be handled by traditional brands (represented by tablet man) we are used to. Rather than one super-hero coming to the rescue, the Advil Liqui-Force is represented by 3 persons attacking and defeating the pain monsters. Once over, the audience clapped showing appreciation to the mini-presentation given by the brand.

Recalling how I purchase pain reliever reminds me the little difference an ad makes that can influence it:

Posted by Janette Toral at 2:23 AM

Now Trending: Get ready for the Boomerang Awards 2011!

The Internet and Mobile Marketing Association of the Philippines (IMMAP) just recently launched the Boomerang Awards 2011 website! Interested participants may now download the guidelines for this year’s awards. 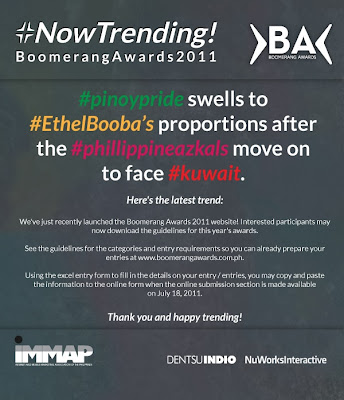 See the guidelines for the categories and entry requirements so you can already prepare your entries.


Using the excel entry form to fill in the details on your entry/entries, you may copy and paste the information to the online form when the online submission section is made available on July 18, 2011.
Posted by Janette Toral at 11:10 PM