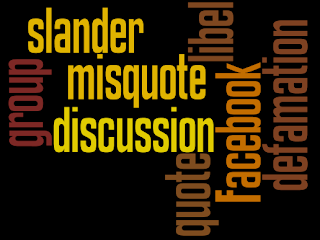 Since Monday afternoon, I have been in an ongoing consultation session with a friend on the subject of being misquoted that resulted to him being cyber-bullied in the process. It made me ponder on the responsibilities of discussion group moderators and members who just participate without regard if what was posted was true in the first place.

Here are my personal thoughts on the matter and will update this as I receive more questions:

Question: In a private conversation, direct or overheard, with a personality, can he or she be quoted without consent? That quote be posted in discussion group, Twitter, blogs, and the likes?

Answer: NO. You should ask consent first and ensure you got proper context or conversation frame. Without it, especially if controversial, can spark confusion, hatred, and the likes. Unless of course that is the intention.

Question: Can a quote be rephrased for clarity and depth?

Answer: NO. When a person reads a quote, they assume it was said AS IS. Editing it may require a disclaimer of sorts stating this is how you recalled it. Again, put proper frame of the conversation that took place.

Question: If a person's private conversation quote got posted in a discussion group, edited (not said as is), and without consent that resulted to attacks, being cyber-bullied, and reputation damage, what remedies does a victim have?

Answer: If that happened to me and I know the person, I will first pursue the saving of relationship and recognize that mistakes can be made. Not assume that there was harmful intention to begin with. Issue apologies, accept it, and move forward. I was adamant in suing someone I hardly knew for libel a few years back and did all the paperwork quietly. But then the person reached out and apologize, corrected the mistake, I decided not to lodge the case anymore.

If the misquote happened during a corporate engagement and the person who caused this damage is an employee, I will definitely ask for sanctions for that was misuse of information and resources (especially if posting on social media happened during office hours). An unequivocal apology may also be necessary especially if the attack was made online, maliciously, and/or has caused moral damages. It doesn't matter if that was a private discussion group or not.

If parties refuse to correct their mistakes, then pursuing legal action may be necessary if only to show that you won't tolerate any false information being spread about you.

Question: Is the deletion of a thread that has attacked a person sufficient?

Answer: NO. Deletion of a thread without explanation and not taking accountability for one's action is not enough. Discussion group members, if already having a hint that there was an earlier foul play or misinformation spread, should demand accountability from their group administrators.

Especially if that misinformation made them also gullible in the process, due to community trust, and participated in the attacking of a person who doesn't deserve to be cyber-bullied in the first place.

Although demanding for accountability may be futile if the moderators were the ones who initiated the quote, misquote, cyber-bullying, and made their community members commit libel in the process.

Posted by Janette Toral at 5:11 PM