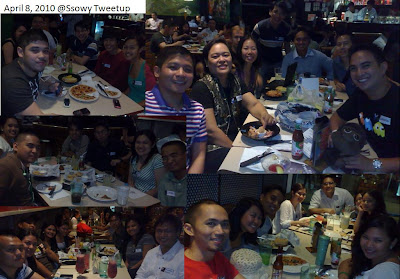 Last April 8 was a very memorable day for me. I was excited in attending my first Tweetup organized by Sherwin Sowy at National Sports Grill, Greenbelt 3. I'm glad to attend and became part of the biggest Internet tweetup in Philippine Internet history to date. The gathering had around 80+ Twitter folks in attendance.

That convinced me that being influential on Twitter is not really about having a huge number of following but being able to mobilize people, making them to support an endeavor, and tapping to the influence and network of common friends in the process. It was great to see the faces behind the very active Twitter ids.

Saw the iPad in action for the first time too. Yves Gonzalez brought his Apple iPad and it just awed us. (but I still don't think I will buy one.)

Prior to the Tweetup, another event took place that late afternoon - the Orange Nation eyeball led by Kaibigan ni Villar. Word got passed through text about the eyeball and it was a great opportunity to catch up with bloggers actively covering election movements.

What made that eyeball interesting was its purpose to spread positive campaign messages and an appeal to stop the black propaganda happening online being hurled against presidentiable Senator Manny Villar. Also saw Ramon "Monmon" Mitra for the first time.

At 6 pm, around 200 (in my estimate) Manny Villar supporters that converged at Greenbelt 3 paused for one minute as their way of sending that appeal to everyone. Although my video was only focused on the one infront of me.

Before it ended, something unexpected also happened, a group of Gibo supporters were also roaming Greenbelt 3 and both groups end up clapping at each other. Some who knew each other even approached and greeted. It was a nice site to look at reflecting how mature supporters are, at least for this two camps, as Carlo Ople has also noted.

In both activities I witnessed, it amazed me how individuals can build tribes and indeed make a difference today. Communities, especially those active in online and offline social media, are unstoppable. They are more than capable of organizing themselves and inspire their peers to action.
Posted by Janette Toral at 9:53 AM