Last year, I made a blog post about an April Fool's Joke - PayPerTweet. Its possibility as a service was inevitable. Today, Magpie offers an opportunity for Twitter users to monetize their accounts by allowing the site to post an ad tweet. 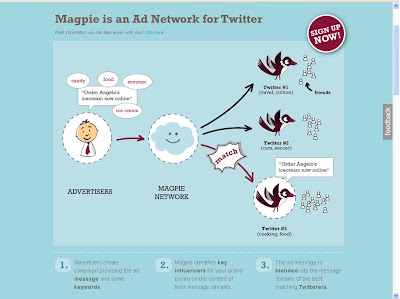 Advertisers can sign up with Magpie and do the following:
Twitter users can either automatically approve all ads or manually approve them. Fees are earned through per view, per click, per sale, per lead, among others. In my case, I prefer per view.

Once your earned fees reached 50 euros, this can now be transferred to your Paypal account. Another option is to re-purpose the credits and place ads.

When joining this service, I kept the following as setting:

Posted by Janette Toral at 7:26 PM