For example, searching for information about the "Vizconde Massacre" shows this result with the first item indicating which news was shared by people and for how many times. 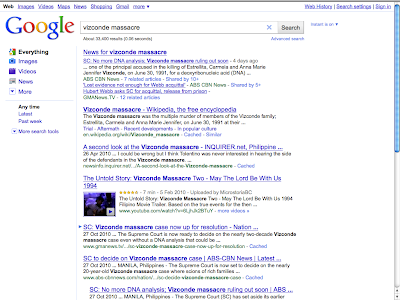 With the Vizconde Massacre case nearing a Supreme Court decision, it is interesting to see as well how the chatter on this topic has increased.

With more information and facts coming out that is open to the public, unlike before when it is limited through traditional media and movies, ordinary Filipinos with Internet access can now discuss this and be further enlightened.

I recall when this issue first came out, much of how I perceive this issue is dependent on what is told in the media. At that time, I already concluded in my mind that Hubert Webb is guilty and former Senator Freddie Web was using his position to influence the outcome of the case.

However, there were social media chatter coming out lately in Facebook and Twitter. Folks giving their opinion and even expressing doubt about the decision rendered on the case.

What caught my attention and am sure of a lot of people is the Webb family dedication in pursuing justice for their son. I can't help but wonder where that passion is coming from after all these years. If I am in their shoes knowing a family member is not guilty, won't I do the same? Then another question came to mind, what if the members of the court that decided on the case was wrong?

But then again, what do we really know about laws and evidences? I guess more reading on that aspect.

Nevertheless, this brings further pressure to the Supreme Court and police authorities in being diligent and explain its upcoming decision on Hubert Webb's appeal for his release, regardless to whose favor it will turn to, with the public having more questions in mind as further information gets unraveled about the case - where a simple "dismissal of an evidence value" may no longer be acceptable as a reason.

Currently in my reading / watching list: (too much to read, watch, and so little time - bookmarking them here. If you have suggested readings, kindly share the link too.)