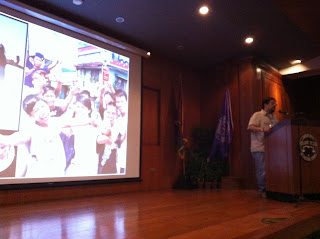 There are many problems confronting overseas absentee voting. The primary one is geography. I think this is a major one. Perhaps the COMELEC can include voters registration as one item in the checklist before an OFW departs overseas. It will save them the hassle of going to the nearest Philippines embassy or consulate.

Kasali Kayo: Reaching Out to Overseas Filipinos for the 2013 Elections via Social Media
Registering as a voter abroad also requires filling up of affidavits and intent to return especially if they have to cross borders just to register or vote. But the important is our desire to vote. Like many Filipinos, my inclination to participate in the elections dwindles especially if you just see the same familiar faces or clans taking turns for local and national positions.

But when parents find their children reaching voters age, the pressure is there to set a good citizen example and share the perspective of our role in changing the course of our country by casting a vote. The deadline for new voters registration, transfer of registration, validation, change of name, correction of entries can be done on or before October 31, 2012.

Overseas Absentee Voting in the Philippines by COMELEC

View more presentations from Janette Toral
James shared that election interest peaks among overseas Filipinos when deadline is near for both registration and actual voting date.

Filipino Internet users, especially bloggers and social media users, can help. If you have a family, friend, or relative abroad, encourage them to register and vote. The COMELEC realizes that its traditional ways of marketing to the overseas segment was not effective as it even resulted to declining numbers. With real people talking about real issues, the COMELEC hopes that bloggers can play an important role in encouraging more OFWs to vote.

And this blog post is in support of that.

I am now asking my Filipino friends and family working abroad to register as soon as possible and vote for the 2013 elections. There are several issues that comes to mind that the upcoming Congress needs to address.

In relation to the elections, Congress should come up with legislation that will make it easier for OFWs to vote answering the geography and document requirements issues. 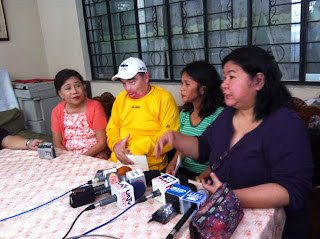 Last May 24, I got the chance to attend a press briefing organized by the Blas F. Ople Policy Center (BOPC). OFW Alfredo Salmos, who just arrived last May 22, was there. When Alfredo finished his employment two years ago, he was unable to secure an exit clearance from his employer. He also got involved in a car accident 10 years before that unable him to get the clearances needed to return home.

He worked as a part-timer while waiting and that is where his electrocution accident happened. Correcting earlier reports, Susan Ople of BOPC explained that Salmos accident did not happened with his former employer. However, they still provided medical assistance even if it is no longer their obligation.

During the 2-year period, Salmos was helped by fellow OFWs. He also stayed in the home of an Indonesian overseas worker who took care of him.

Prior to Salmos photos and story going viral via Facebook, the BOPC  and Villar Foundation through its Sagip-OFW have began coordinating with government entities to help him out.

Susan believes that the government needs to review or improve its procedures for helping OFWs who have finished their employment contracts and wanting to go home. There is currently no established procedures for it.

Cynthia Villar also agreed. In the case of Villar Foundation, Cynthia shared that their OFW assistance program gives priority to OFWs who are sick and need to be taken home.

When Alfredo's case went viral and reported through major television networks, the government provided the necessary assistance to get him home. Help continues to come in but sustainability is also a major concern.

The Villar Foundation will shoulder Alfredo's medical operation and medicine expenses. It is likely that Alfredo will go through 3 or more operations starting with his neck, arms, and other parts of the body as recommended by physicians attending to his needs.

In the same briefing, Alfredo's sister Epifania Salmos-Colina was also present. She was repatriated last year with the assistance of the Villar Foundation as she ran away from her abusive employer in Dammam.

The siblings also got assistance from the BOPC, Villar Foundation, and Puregold to help in their livelihood needs. They have a small store selling various goods in their area.

Last Friday, May 25, Susan reported that Alfredo was able to go home in Cuyapo, Nueva Ecjia. The help of various concerned citizens, both online or offline, made such possible.

The Blas F. Ople Policy Center and Villar Foundation are long time partners in the Sagip-OFW program. It provides repatriation and livelihood assistance program since 2008. It has assisted more than 10,000 OFWs cases. Through Villar Foundation's own fund, it was able to repatriate more than 200 OFWs as of this writing.

Do we need an OFW agency, commission, or department?


Another concern that I agree with is the creation of single government body that will address all OFW concerns including pre, current, and post employed.

Both Susan and Cynthia believe that the creation of a single OFW agency or office needs to be looked at. With the growing number of Filipinos working abroad, the number of personnel and programs handling or addressing the needs of OFWs does not match.

I hope to see more OFWs voting in the 2013 elections and support legislators who have clear programs for them and achievable in 3 years.
Posted by Janette Toral at 10:01 AM