Gamble Craft is the sixth casino review site that we are featuring here as part of a series. 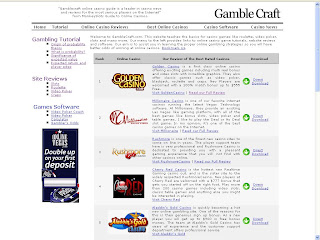 What I like about this Online Casino site are as follows:
Although the site's Alexa ranking may be not high in comparison to other online casino review site, this one has a captive U.S. audience as it ranks 2nd of the 6th I have seen so far in terms of Compete ranking.

Some improvements that can help also includes:

Posted by Janette Toral at 8:40 AM